This document sets CRYOPDP plans in the event of a “no trade deal” Brexit in December 2020. The assumption of a “no trade deal” Brexit is that the UK would be treated as a non-EU country in terms of custom arrangements and World Trade Organisation tariffs would apply. It is assumed in this document that customs/border procedures in January 2021 would exactly mirror the arrangements for non-EU countries without concessions. CRYOPDP considers this as the worst-case scenario as there are likely to be some form of concession around shipments related to healthcare.

With the current indecisions about a Brexit trade deal, all possible final scenarios may provide some challenges for Pharmaceutical and Life Sciences Industry supply chains.

What is clear is that regardless of a trade deal, trade between the UK and EU countries will be subject to customs and border checks.

From January 2021, border procedures would correspond with arrangements of non-EU countries without concessions which would put pressure on supply chains in terms of customs arrangements and application of world trade organization tariffs.

Shipments between the UK and EU countries account for approximately 30% of total shipments handled by CRYOPDP. A significant proportion of EU shipments relates to the UK operating as an EU hub for shipments originating outside of the EU.

Since the majority of CRYOPDP shipments have origins or destinations outside of Europe, CRYOPDP has the processes, systems and detailed knowledge to manage shipments to and from the UK under non-EU border/customs arrangements. However, the application of non-EU arrangements to the UK will inevitably result in additional costs, temporary increased transit times and unpredictable delays. The biggest impact is likely to be over the first six months of 2021 as the UK and EU borders cope with the increased clearances between the UK and EU. 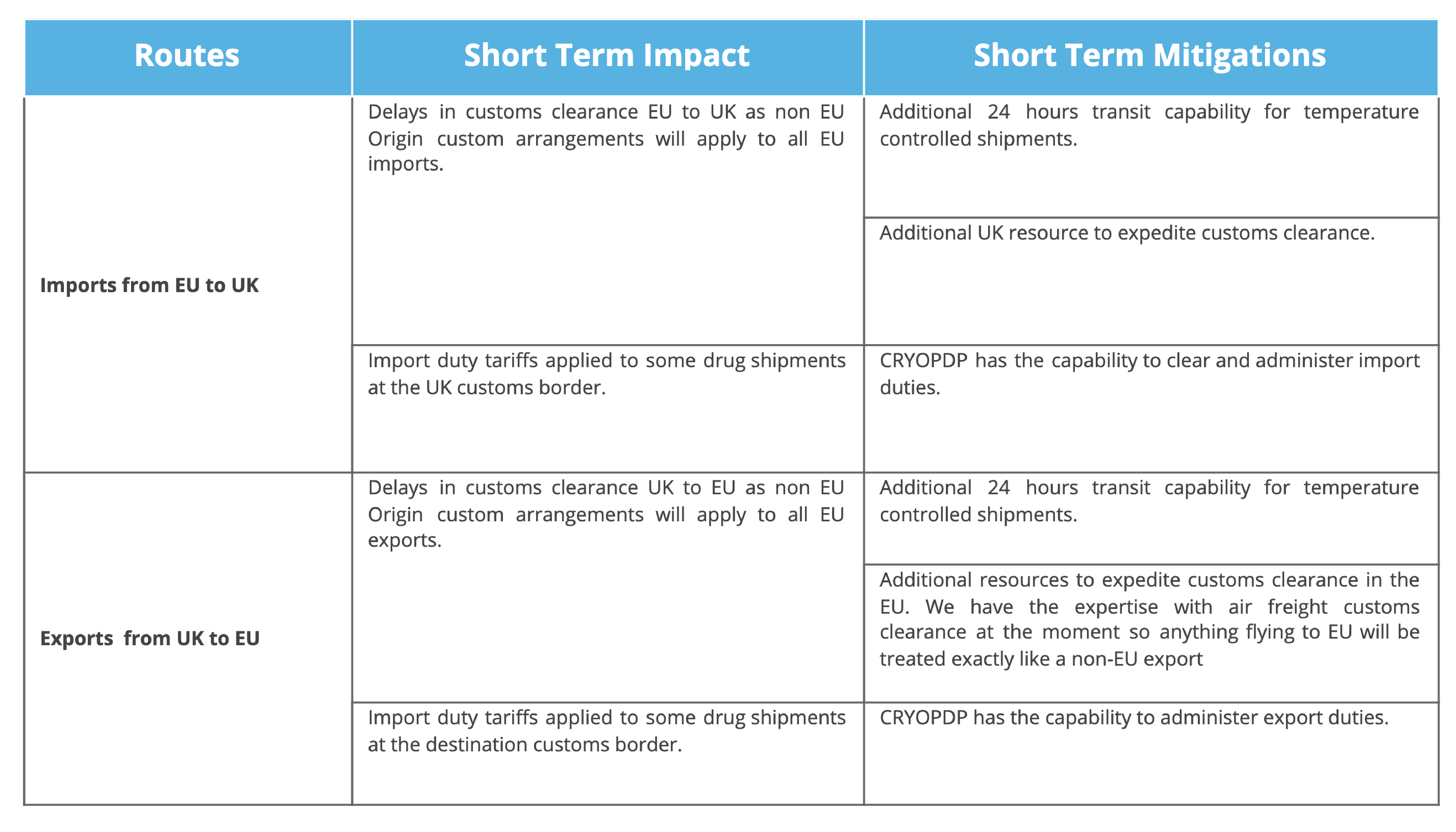 CRYOPDP will work with individual customers to develop the most cost-effective routes to meet customer’s requirements and service levels. It is difficult to quantify the additional costs associated with a “no trade deal” Brexit but they will fall into the following categories:

Import goods from outside the EU: step by step

The Brexit transition period is set to expire on December 31, 2020. If you have questions regarding possible outcomes and effects on transporting goods across international borders, please contact CRYOPDP at contact@cryopdp.com